Whether I am on my phone or my laptop, I will screenshot any conspiracy theory-related posts as they come up. (I'm not sure why this is, but they often appear in my Facebook newsfeed in the middle of the night.) However, I'm too lazy to anonymize (that's a word?) and post them right away, so they just pile up on both devices. Needless to say, this particular photo is old, so I am unsure which tragedy RT is referring to. (I do think I remember that this happened in the United States.)

That second comment. Geez. Don't you just love it when people use tragic events to call for immediate political action? Both Democrats and Republicans - usually with the Democrats being more obvious - use these incidents as a platform often on the very days that they happen, but conspiracy theorists take it to another level.

Let us look at what this person is saying...Fake race war. Just what? I am trying to figure out what that means, like if there is a real race war but that the New World Order (NWO) is adding fuel to the fire, or if the supposed race war is entirely fabricated, like the claims that the Sandy Hook shooting is a hoax and the 9/11 plane crashes were holograms. I'm not one to throw around the term "race war" - I'd probably find a more suitable terms, depending on the context, like ethnic conflict, genocide, ethnocide, racial tension, etc. I have never really understood what extreme conservatives and conspiracy theorists mean by that.

And let's remember that this is happening "faster than shit out of a goose."

I am seriously wondering if that's a phrase people actually use. Maybe it's one of the ones I have not heard of before. I know geese will poop on people when they are flying and will soil golf courses, but I have no idea the speed at which it propels out of a goose's butthole. If I was the commenter, I would have said guinea pig, since I am biased towards those screaming potatoes. 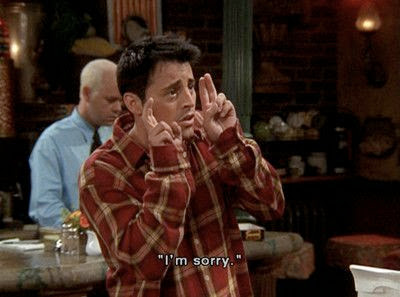 Is the "government" synonymous with the NWO? Or are they merely saying that what the government is today is not technically what a government is? Either way, it does not really make sense. And as always, I'm probably overthinking it.

Ah, LinkedIn, the site where you...be professional. I was doing my usual on there - looking to see why the hell I had a notification (person looked at my profile, I think), scrolling through the feed to save any semi-interesting articles for reading later, and whatever. Then I stumbled upon Alex Jones. I don't remember what happened exactly, but I think one of my connections liked how Jones was going to "break an ultra important story" at a particular time. This was something I needed to check out.


Now I have to wonder why he needs a LinkedIn. Is it just another means of connecting with people? "I already have the youngsters through Twitter, and the older folks through Facebook. Now I just need to reach the white collar crowd..." Or does the conspiracy theory industry(?) really hire through these services? I wonder if Alex Jones is looking for a new career. "Yes, I am highly skilled with public speaking and radio."


I just can't get over how skilled he is. FIFTY! 50! Five-zero! Not only does he have a LinkedIn, but so do his InfoWars colleagues. If they are seriously trying to open up more professional opportunities for themselves, I have to wonder why they don't just create a professional networking site within InfoWars, like they did with dating - LinkedInfoWars.

The Hopi predicted chemtrails, I guess

People are obsessed with how the world (as we know it) is going to end. From nuclear disasters to environmental disasters to supernatural whatever, humans pretty much have all of the bases covered. We also like to make our own bastard interpretations of how the world is to end based off of the Book of Revelations and the Maya calendar and so on.

Because I studied cultural anthropology in undergraduate, I appreciate it when people read about other cultures. Except when they get their information from memes. Very few memes I have seen are accurate, or if they are, are misleadingly set up in a way to support the creator's agenda. I also like to see links with more information in the descriptions, but it's social media, so very few people actually do that.

Conspiracy theorists will do pretty much whatever to spread word of what they know - share hours-long YouTube "documentaries," post InfoWars links into Facebook groups (or if you are a real conspiracy hotshot, maybe even write for them), etc. What I guess is also on that to-do list is reading through Hopi folk tales.

By looking at this meme (and should I point out its lack of further information), I could probably correctly guess that this quote was taken out-of-context. Maybe whoever read this got it from real Hopi literature, oral stories, or a collection of what may-or-may-not-be real quotes from the Hopi. Who's to say that this is not completely made up by someone extremely dedicated to the chemtrail awareness cause, or is merely a troll?

I will admit that I am not familiar with the culture or history of the Hopi, so I am unable to give any elaboration. (Maybe I will save it for another day.) However, you do not have to be a social scientist or historian to be able to quickly pick out the ridiculousness of this meme.

Well, if the Hopi really do happen to believe that chemtrails signify the "day of purification," maybe they can spot some reptilians as well.

Sometimes I feel bad for the people I am connected with on social media - I probably get more out of the relationship than they do. For example, I take screenshots of their conspiracy theory posts and embed them on this blog. At least I have the courtesy to block out their names.

Earlier in the year, this social media site called tsu was brought to my attention. Some friends and I were discussing intellectual property, and how I am for intellectual property rights. I do have a selfish reason for wanting legislation concerning intellectual property in that I am a writer and wish to make money off of my art. Ads on my websites can only bring in so much revenue. In order to devote more of my time to writing and concentrate on larger projects, I need money. Working full-time drains me of my creativity. (As does school.) Being unable to bring in adequate revenue from book sales because most people can access my materials for free is of detriment to me. I doubt other artists want that as well. We work hard for what we do. If I want people to view my work for no cost, I will be the one to decide that. All of that aside...one of my friends brought up that social media site. They share some of their ad revenue with their users. Pretty much, this group of people was saying, was that the advancements in technology will allow people like writers to rely on technology itself in order to make themselves the money they need so that they can focus on what they really care about. (The majority of people can even see this happening with the prevalence of Adsense...no matter how sucky it is.)

Five months and three whole cents later, my network on tsu is alright. They have some interesting niche groups on there, which I enjoy. Unfortunately, the libertarian community consists mainly of the Infowarrior types who seek out to spread the "truth." It really is fascinating how alternative news types (both the good and bad) have utilized technology to spread awareness. In the case of conspiracy theorists, they have made it so that looking at the sky is even more fun. Why just mindlessly notice a contrail when you can freeze in your tracks, become infuriated about how the government is trying to control our minds and turn us into sheep, then take a picture to document the evidence? With all of the hashtags they use, it's a wonder how anybody could not notice.

Facebook, tsu, Twitter...where haven't the conspiracy theorists made their presence known? Huckabeast22 wantsd us to follow him, so I'll let him have that. Thanks, man, for keeping us informed. However, there is just one thing I am really disappointed about - you need to use red to point out the chemtrails, not black. The red makes it look like this issue needs to be more urgently addressed, thus making it so chemtrail awareness activists are taken more seriously.

Now that we have dissected this particular chemtrail photo - what information are you able to tell about me from this screenshot? (I took it at 8:02 pm...although my phone is a few minutes behind.)

Lured by a free book

On this page, I saw a post for this one free book.

I was excited because "FREE BOOK!!!!" Then I got around to reading the summary.

Thank goodness this person drew arrows and labeled the "Chemtrail Mass," or else I might not have noticed!

Unfortunately, my untrained eyes were not able to figure this all out on my own. I think I need to watch more YouTube videos on how to detect these things. 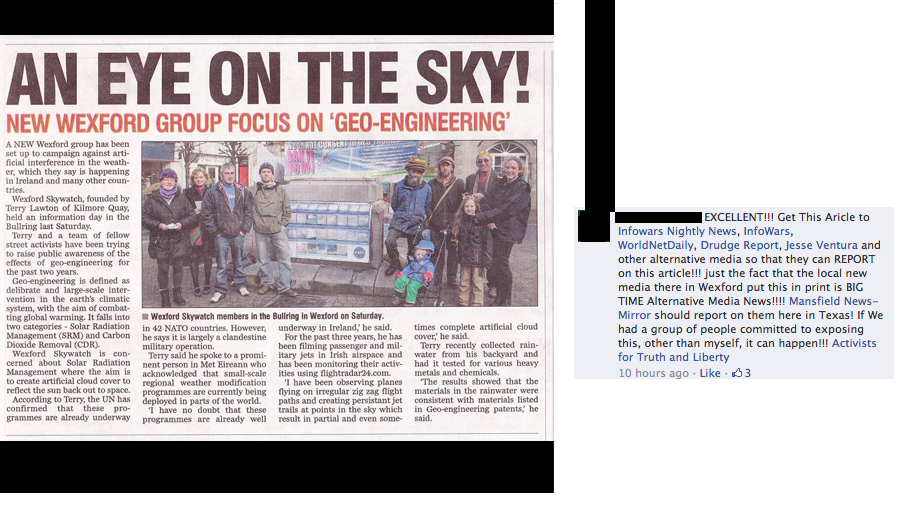 The article goes to show that coverage from local media proves the existence of chemtrails...now to spread the news to more reliable, reputable, and worthwhile sources.

Whether I am on my phone or my laptop, I will screenshot any conspiracy theory-related posts as they come up. (I'm not sure why this is,...